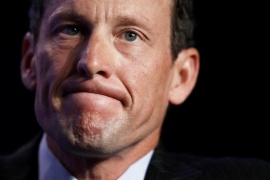 I suppose it’s my turn to chime in on the Lance Armstrong debacle.

As I have worked in the bike industry for the last six years, friends and family are always asking me: “So what’s your take on the whole Lance thing?”

My position is, and has always been, the following:

Do I think Lance doped? Absolutely.

Do I think Lance is the greatest cyclist – AND marketing juggernaut – of his time (perhaps ever)? Absolutely. Without a doubt. That doesn’t change.

In the business we always talk about the “Lance Effect.” You could actually see it in the bicycle industry sales data from the late 90s and into the early 2000s. And everyone was along for the ride. U.S. interest in cycling boomed, and the likes of Trek, Nike, Oakley, even other cycling brands not directly linked to Lance second-hand cashed in.

So it is with disbelief that I read about the recent litigation by a promotions company that is seeking retribution for bonuses paid to Armstrong, claiming in so many words that he earned them upon false pretenses.

There’s one flaw in this argument in my opinion: it suggests that the bonuses paid to Lance were purely to reward his athletic achievements. That’s a load of crap. Sponsors pay bonuses to athletes to “reward” them for one thing, and one thing only- the exposure the athlete brings their brand. If you involved yourself with Lance Armstrong during his run of success and popularity, you more than got your money’s worth. Case closed. How he did it means nothing now.

As this Forbes article supports, since his national TV admission of cheating, none of those companies are likely to take a branding hit. None of them are losing money now for aligning themselves with Lance then. Yes, they have ended their relationship with him moving forward, as they should, but to claim he’s tarnished their image along with his own, and to pursue retribution (regardless of language dictated in his contract) is ridiculous. You got what you paid for and then some: brand exposure galore.

What gets lost in all of the doping scandal talks, in any major-money professional sport, is that at the end of the day, it’s all a business – a business of entertainment, and nothing more. On the surface we act like we want sport to be pure, and our heroes to be genuine. But you know what? It’s a false perspective that we merely tell ourselves to sleep better at night. Ask yourself genuinely, do we really care if…

…baseball man is taking something to help him hit the ball farther?

…football man is taking something to help him tackle harder?

…bicycle man is taking something to help him ride over that mountain faster?

…action movie hero man is taking something to make him a more exciting action hero?

You probably thought to yourself, “Wait. That last one is totally different.” But is it? I contend that Arnold Schwartzenegger & Sly Stallone are in the same business as Lance Armstrong and Barry Bonds: to sell tickets, VIP sponsor packages, and commercials. Would you demand your money back after seeing Terminator if you found out Arnold was on ‘roids? I highly doubt it. But somewhere along the way we convinced ourselves that professional sports are different. That sport is “real life,” and Hollywood/TV are just fictional entertainment. When in actuality, they are one in the same.

As long as the kind of money that’s being thrown at athletes today – like from said promotions company mentioned earlier – is there to be made, there will never be anything genuine about professional sports. So I say, sit back, pass the popcorn, and enjoy the show. Cause that’s all it is, and that’s what you paid for.